This pamphlet presents a novelization of the 1928 silent film The Road to Ruin, and is accompanied by an essay on juvenile delinquency, particularly sex delinquency.  The plot follows teenager Sally Canfield as she navigates the peer pressure to date, have sex, drink, and do drugs. Sally is introduced to this world of delinquency by her friend Eve Terrill. Sally and Eve go on double dates with their boyfriends Jimmy and Al where they drink and smoke. After breaking up with Jimmy, Sally meets an older man, Don Hughes, who exposes her to more sex, drinking, and party games. When Don gets her pregnant, he insists she get an abortion. Sally dies at the end of the film due to complications from the abortion.  The apparatus of the commentary serves to bolster the message of the film, and to provide the “authority” that ostensibly informs the production.  The Road to Ruin is one of many films wherein a sexually liberated woman is punished by means of abortion. To this day, popular culture often presents the subject of abortion through the lens of stigma. 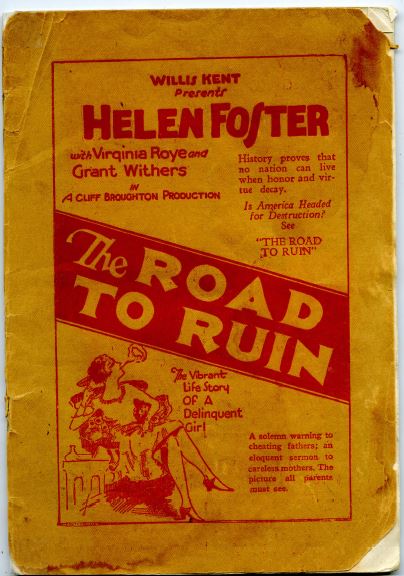