This pamphlet contains a transcription of a debate between Margaret Sanger and Winter Russell on birth control and published letters between United States President Theodore Roosevelt and Irish playwright and socialist reformer George Bernard Shaw. Russell argues against birth control, saying the best form of birth control is “self-control.” He believes the sole purpose of marriage is to procreate and anything divergent from that is a crime.  Sanger is in favor of affordable birth control for low-income families, which, she theorized, would lead to fewer children living in poverty.  Many of Sanger’s ideas on birth control emerge from the eugenics movement—using birth control as a way to stunt the growth of lower classes while allowing upper classes to expand. While Sanger is an important figure, contemporary reassessments of her work rightly foreground her racist and classist views. 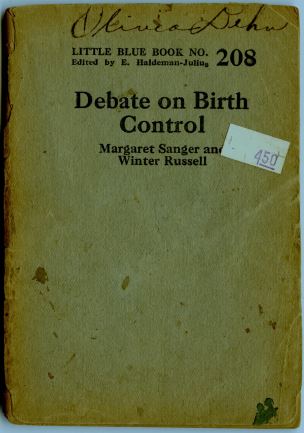